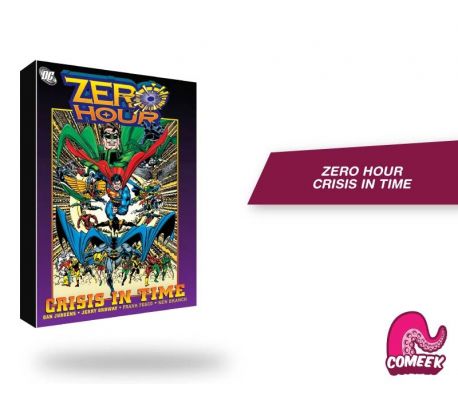 Written and pencilled by Dan Jurgens (CONVERGENCE, THE NEW 52: FUTURES END) and inked by Jerry Ordway (THE DEATH OF SUPERMAN), ZERO HOUR chronicles the discovery by DC's greatest heroes of a tidal wave of temporal disruption, as they band togheter to combat chronal chaos.When all of his family and friends were killed by the attack of a super-villain, the once heroic Green Lantern went insane and became the immensely powerful Parallax. Hoping to save his loved ones, the mad Hal Jordan decided to recreate the universe by unraveling time. Now as realities and time lines converge, dinosaurs walk the Earth again, deceased heroes are resurrected, and half the population has suddenly vanished. With Parallax on the verge of success, Superman, Batman, Robin, Flash, Wonder Woman, Aquaman, and the rest of the world's heroes must find a way to stop their former comrade or cease to be as all existence ends.This volume collects stories from SHOWCASE '94 #8-9 and ZERO HOUR: CRISIS IN TIME #4-0.